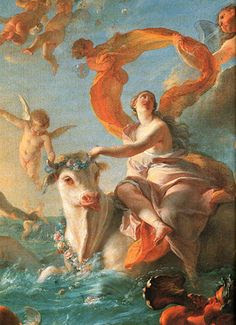 "Sing, Ovid, to me of Metamorphoses, and breath all these stories into my mind as a remembrance of your fine craft" ..........  But since there are so many mythological stories in this book, and Metamorphoses is either referred to, or used as a basis for stories in so many other works of literature, I've decided to compile reasonably detailed posts.  My mind is certainly not going to hold such detail, so my blog will have to.

“My soul would sing of metamorphoses.
But since, o gods, you were the source of these
bodies becoming other bodies, breathe
your breath into my book of changes; may
the song I sing be seamless as its way
weaves from the world’s beginning to our day.”

Creation begins featureless and confused, both land and seas uninhabitable.  Opposites battle and there is chaos.  “A god” and nature come together to bring unity and organization to the world, and there are two possibilities as to the birth of man:


To man, “he gave a face that is held high; he had man stand erect, his eyes upon the stars ….”

During the first or golden age, laws and punishment do not exist as all kept faith by righteousness. and man only needed to gather as the harvest was plentiful.

Saturn is banished and his son, Jove’s rule begins, starting the second or silver age.  Jove split the year into seasons, and the change of weather prompted men to build houses.  As the bullock groaned under their yokes we sense a decline in the ease of life.

The third bronze age begat more cruelty and battle, yet it was not sacrilegious.

The fourth and last age, the age of iron, began the foulest of all ages and “the earth saw the flight of faith and modesty and truth” and in their place sprang up wicked behaviour.  Instead of accepting the earth in an almost innocent way, only seeking to fulfill their basic needs, men instead began to seek beyond their needs to their wants, exploring and pursuing treasures which corrupted their simple faith.  The lust for gold and iron brought wars, and distrust and familial discontent and strife followed.

Jove must contend first with the Giants, who attempt to gain control of the sky, and then man who is now scattered all over the earth, doing what he will.  They are tainted and like a pestilence, and he longs to eradicate their infestation. Yet the other gods are worried; if Jove eradicates man, who will worship them, so Jove employs a new plan, enlisting different gods to create a flood and only two people survive:  Deucalion, the son of Prometheus, and his wife, Pyrrha.

Deucalion is overcome when he sees the devastation of the earth and decides to pray to the oracle but is told that they need to throw behind them the bones of the great mother.  Pyrrha is terrified that she needs to offend the Shade of her mother, but her husband says the great mother is earth and they need only throw stones.  Amazingly the stones become the new race of men.
Python, a terrible serpent, slithers from the earth, but Phoebus (Apollo) kills him with his arrows, and the sacred Pythian games were establish in memory of the act.  Daphne, daughter of the river god, was Phoebus' first love but Cupid, resentful at Phoebus' mocking of him, shoots him with an arrow that ignites love and Daphne with one that spurns it. Apollo pursues, and as he catches her, in response to a prayer to her father, she is turned into a laurel tree.  Yet Apollo loves her still, and this is why the leaves of the laurel crown the heads of the Roman chieftains.

The river god, Inachus wept for his missing daughter Io. She is fleeing the god, Jove, who catches her and rapes her, yet to hide his deed from his wife, Juno, he turns Io into a beautiful white cow.  Yet Juno is not easily fooled and she sets a guard on Io, Argus of the hundred eyes, who never sleeps with all closed at once.  Jove finally feels compassion at Io's plight and sends Mercury to lull Argus to sleep with his reed pipes with a song of Syrinx (who fleeing from Pan was turned into a reed), and then he cuts off his head. Juno set the eyes of Argus into the tale of a peacock, whereas Io returns to her original form in her refuge on the banks of the Nile and becomes the goddess, Isis.

Io's son by Jove, Epaphus, mocked the son of Phoebus, Phaeton's, claim that the Sun was his father.  Mortified, he asks Clymene, his mother, for proof and she confirms the truth, sending him across Ethiopia and India to Phoebus' palace.


From O's brilliant post, I realized that it would be fun and helpful to add the transformations in each book in a more obvious form than merely reading of them in the text.  So here they are!