On Reading 'The Faerie Queene' by C.S. Lewis 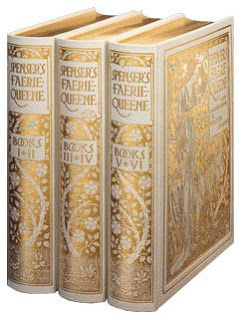 "Beyond all doubt it is best to have made one's first acquaintance with Spenser in a very large --- and, preferably, illustrated --- edition of The Faerie Queene, on a wet day, between the ages of twelve and sixteen; and if, even at that age, certain of the names aroused unidentified memories of some still earlier, some almost prehistoric, commerce with a selection of 'Stories from Spenser', heard before we could read, so much the better."


A number of us are going to be reading The Fairie Queene beginning sometime in April and, considering the difficulty of the poem, I decided to do some pre-reading investigation.

Although C.S. Lewis is known for his books on theology, his actual expertise was in Medieval and Renaissance literature.  He has a number of essays relating to The Fairie Queene, and when I stumbled on this one, I thought it a perfect beginning.

Lewis writes that the optimal experience with The Faire Queene is created if one reads it between the ages of 10 and 16, with a large illustrated edition and then grow with the work, starting with mere wonder at the story and advancing to a critical appreciation of it, cultivating a relationship with the work that will remain and flourish throughout life.  But while advocating this process, Lewis realizes many may come to The Faerie Queene later in life, and he is writing to give guidance to the mature reader with his first experience of this great work.


Lewis instructions begin very simply; as the child does, one must begin with The Faerie Queene.  Next, even if one does not have a large illustrated edition, one should imagine the book they do have to be a heavy volume that should be read at a table, "a massy, antique story with a blackletter flavour about it --- a book for devout, prolonged, and leisurely perusal."  The illustrations would be not only fantastic and beautiful, but also wicked and ugly.  While the book is new, it is also old, ancient yet original.

"All this new growth sprouts out of an old, gnarled wood, and, as in very early spring, mists it over in places without concealing it .............  And it is best to begin with a taste for homespun, accepting the cloth of gold when it comes, but by no means depending on it for your pleasure, or you will be disappointed ...."

Lewis reveals that Spenser's friends wanted him to conform to the Puritan perspective of the time, being only a "servile classicist", yet his poetry appeared to naturally break out of this mould.  After being cautioned by a his friend on touching too closely on papist and medieval themes by his references to "Ladies of the Lake" and "friendly fairies" in his poetry, Spenser remained true to the natural appreciation he harboured for the Middle Ages, and taking "all his renaissance accomplishments with him", produced The Faerie Queene.  In blending the two ages, Spenser in effect "became something between the last of the medieval poets and the first of the romantic medievalists."

As a child one may have a uncomfortable feeling that one has met many of The Faerie Queene's characters before, but as a mature reader one has the apprehension to discover the moral allegory within the work.  While critics aren't in agreement as to how much emphasis should be placed on it, it is not necessary to analyze the poet's exact meaning.  Instead we should simply have an impression of regions within the poem that are not always what they seem.

Lewis ends with William Butler Yeat's quote on Spenser's House of Busirane, saying that Spenser's characters are "so visionary, so full of ghostly midnight animation, that one is persuaded tht they had some strange purpose and did truly appear in just that way."

And so I can now step into Spenser's world with a little more imagination and expectation.  I've already been exposed to the world of King Arthur and so I'm looking forward to some more fantastical adventures.  And honestly, a few fairies would be very welcome.