The Brubury Tales by Frank Mundo 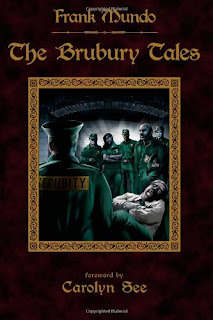 "When in April, and it hasn't yet rained,
And the drought of March has again sustained
Another year of our eternal spring;
Then old Santa Ana begins to sing
That fiery yet most familiar tune
How Los Angeles always feels like June ...."

No, The Brubury Tales are not my usual classics bent, but since it is based on a classic, The Canterbury Tales, I decided to make them, not only a pairing, but a 2015 challenge.

In this poem, we are not confronted with pilgrims, but seven security guards who work at the Holiday Inn in L.A.  Six men and one woman make up their team, as they perform their duties during the unsettled times of the Los Angeles race riots.  The prologue introduces each of them:  Leo Kapitanski, Alex Loma, John Shamburger, Joseph Dator, J.T. (the narrator), Rolla Amin, and Darrin Arita or "The Feet".

As Christmas is approaching, each guard is lobbying for vacation time during the holidays, but Leo Kapitanski, their security chief, comes up with a unique idea. Each one of the guards must tell a tale, and the guard who crafts the best tale, will be awarded with the time off.

Leo is the first to tell his tale and exhibits some fine alliterative verse, reminiscent of the style of the Pearl poet (Sir Gawain & the Green Knight):

"Those were tumultuous times in Olde Yellowfield:
When widespread war had wracked the west;
As Pestilence and plague plundered through the east;
And silky southern skies, soot-saddened into shade
As burnt and billowing breaths of northern brush
Did daily darken the heavens in dismal doom!
And for years was Olde Yellowfield yanked to black
By those soot-stacks that steadily stole the sun.
Olde Yellowfield was new Blackfield, banned from light ..."

Yet not everyone appreciates such poetical talents, and The Feet protests over this "literary crap".  So Leo agrees to tell another tale full of vice, since no one can appreciate a story well-told, because:

"'In today's world where television rules,
Personally, I blame the public schools.'
But Leo disagreed a little bit,
'Takes a village to raise an idiot.'"

Leo's tale weeps full of sorrow and distress, ringing with shades of lost chances and bitter regret, as a man tries to navigate the paths of life and love and fails miserably, a red stain left on his attempt, an unendurable burden on his heart.

There are seven tales in all, in a variety of settings and time periods, covering a number of different issues with respect to love, marriage, betrayal, regret, and death, yet hope resonates in these explorations of life's struggles and victories.  Humour is also woven into the fabric of the narrative, delivered with an adeptness that gives a sublime harmonization with the other serious themes. Though each tale has a modern twist, they bear resemblance to stories of Dostoyevsky, Boccaccio, Saki, Poe, O'Henry, Dickens, Twain, the Bible, Dante, Gilman, Crane, Anderson and Bierce, and it's a veritable treasure hunt, to sift through the narrative to see if one can spot these recognizable classics.  There even is a remake of Omar Kayyam's The Rubaiyat, which is very cleverly done.  In another twist to the story, the author himself makes an appearance as the supervisor.  There is an abundance of literary wealth within this book, and one can imagine the work as a tapestry; each thread you pull leads to a new idea, or allusion, or theme, working singly and yet together to form a unique and complex whole.

With regard to the poetic structure, it's mostly comprised of couplets in iambic pentameter, echoing very much of Chaucer's style and tone.  Yet there are variations in poetic style at certain points during the tales which helps to give a different flavour to the stories.  The author is also is very adept at changing the voice of the characters, each one sounding like an individual and making it very easy for the reader to step into their world.

This read completes my The Canterbury Tales/The Brubury Tales Project for 2015, and I think I can say that it was my favourite project of the year.  Not only was I pleasantly surprised at the enjoyment that I received from Chaucer's merry and sometimes, raunchy tale, I was blown away by The Brubury Tales and the talent and aptitude of its author.  A great project, all around!