Hamlet: The Prince or The Poem? by C.S. Lewis 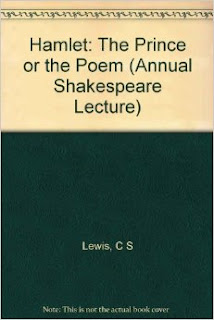 “A critic who makes no claim to be a true Shakespearian scholar and who had been honoured by an invitiation to speak about Shakespeare to such an audience as this, feels rather like a child brought in at dessert to recite his piece before the grown-ups.”

Lewis begins his lecture by claiming that his aim is not to examine what other critics have before him, but to consider why the critics have failed to agree about the procrastination exhibited by the character of Hamlet.  He first outlines the three different camps:

In the first case, if Hamlet is indeed a failure, we waste our time investigating why his actions were delayed.  Yet, if this failure were indeed a reality, why does Hamlet touch us so?  Why does it echo with "the sense of vast dignities and strange sorrows and teased 'with thoughts beyond the reaches of our souls'"?  If Hamlet is failure, then perhaps failure is better than success, and such a verdict could never be rendered with less certainty.

With regard to point two, the opponent to this view is Hamlet himself.  He declares that he is a procrastinator, a cowardly soul who wavers with indecision.  The ghost, for the most part, is in agreement.

The last point seems to be the most logical, yet why then, in all three camps, does the play appear to hold each in thrall, enchanting the very critics who criticize it?  Does the mystery and magical appeal of the play have little to do with Hamlet's actual character, but instead is due to something entirely different?

Lewis brings to light Aristotle's definition of tragedy, which is an imitation not of men, but of action and life and happiness and misery, yet "action" by ancient standards means "situation."  Instead of always attempting to delineate a character, one should first "surrender oneself to the poetry and the situation." It is through poetry and situation, and for their sake, that the characters exist.

For Lewis, the ghost does not merely tell of the murder of Hamlet's father.  Instead, the ghost and Hamlet are inseparable, and indeed the spectre is different from most vile ghosts in Elizabethan drama; this ghost is willfully ambiguous.  Its presence lends an enigmatic uneasiness to the play, filling Hamlet's, and even other character's, minds with doubt and uncertainty.  " ..... the appearance of the spectre means a breaking down of the walls of the world and the germination of thoughts that cannot be thought; chaos is come again."

The subject of Hamlet is death.  Lewis does not base the theme on the numerous deaths of the characters, rather the situations they find themselves contemplating.  We read it in the ghost, in the line of "melting flesh", in the rejection of suicide, in the graveyard, the skull ........  As we read Hamlet, we cannot escape it, which gives the play its quality of obscurity and apprehension.  There are other elements to the play, but there is always this groping toward the final end and questions about the destiny of the soul or body.

Hamlet's vacillations do not balance on his fear of dying, but instead a fear of being dead.

"Any serious attention to the state of being dead, unless it is limited by some definite religious or anti-religious doctrine, must, I suppose, paralyse the will by introducing infinite uncertainties and rendering all motives inadequate.  Being dead is the unknown x in our sum.  Unless you ignore it or else give it a value, you can get no answer."


Yet Lewis says that Shakespeare's own text does not confirm his theory, nor has Shakespeare given "us data for any for any portrait of the kind critics have tried to draw."   We enjoy Hamlet's speeches "because they describe so well a certain spiritual region through which most of us have passed and anyone in his circumstances might be expected to pass, rather than because of our concern to understand how and why this particular man entered it".  And, in fact, Hamlet is an Everyman.  He is a hero yet also a "haunted man --- man with his mind on the frontier of two worlds, man unable either quite to reject or quite to admit the supernatural, man struggling to get something done as man has struggled from the beginning, yet incapable of achievement because of his inability to understand either himself or his fellows or the real quality of the universe which has produced him."

The critics have never doubted the greatness or mystery of the play, but they simply put it in the wrong place, "in Hamlet's motives rather than in that darkness which enwraps Hamlet and the whole tragedy and all who read and watch it."  It is the mystery of the human condition.

Lewis ends by acknowledging the weakness of his theory, only because his type of criticism does not have centuries of vocabulary to support it, as does the other type of criticisms.  Yet he wishes that Hamlet could be played as "a dishevelled man whose words make us at once think of loneliness and doubt and dread, of waste and dust and emptiness, and from whose hands, or from our own, we feel the richness of heaven and earth and the comfort of human affection slipping away."  Perhaps his views are childish, yet children remember the details of stories.  So, is Lewis a literary child?

"On the contrary, I claim that only those adults who have retained, with whatever additions and enrichments, their first childish response to poetry unimpaired, can be said to have grown up."


Deal Me In Challenge #1