Shooting An Elephant by George Orwell 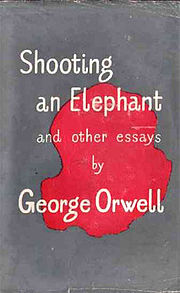 "In Moulmein, in Lower Burma, I was hated by large numbers of people --- the only time in my life that I have been important enough for this to happen to me."

Orwell tells of his stint in Burma as a police officer under British colonial rule.  He was despised by the people as an agent of the perceived oppressors, but in spite of his job, his sympathies lay with the natives and he felt constant guilt because of his duties.

One day he received word that an elephant had stampeded a Burmese Indian to death and was rampaging through the local bazaar.  It was a tame elephant that had been chained when it had gone "must," (a periodic cycle experienced by a bull elephant when its hormones are elevated), but it had broken the chains and escaped.  Orwell took his rifle and a small gun, not at all sure what he could do to stop the invader.  Initially he had no intention of shooting the animal, but when he arrived at the scene, the locals were in high emotion with the anticipation of the killing of the elephant, and Orwell felt he had no other choice.

"And it was at this moment, as I stood there with the rifle in my hands, that I first grasped the hollowness, the futility of the white man's dominion in the East.  Here was I, the white man with his gun, standing in front of the unarmed native crowd ---- seemingly the leading actor of the piece; but in reality I was only an absurd puppet pushed to and fro by the will of those yellow faces behind. I perceived in this moment that when the white man turns tyrant it is his own freedom that he destroys ...."


Approaching the elephant, who was now calmly munching grass, he shot it a number of times, however, it merely groaned and sagged to its knees.  While Orwell knew that he'd fired the fatal shot, the animal took what seemed like forever to expire, and he finally left the scene, hearing later that it died a half an hour after his departure.  Relief flooded him that the elephant had killed a "coolie" because it gave him a pretext for the execution, and he was able to avoid admitting the real reason for his actions ...... that he didn't want to look like a fool.

Orwell begins his essay by describing his feeling of helplessness at being part of the British imperialist movement, but ends up inverting it by describing the impotence he feels against the masses, the very people for which he harbours sympathy.  He is trapped between not only a political sytem, but a social one as well, and his powerlessness is very effective.  Once part of a collective, to a certain degree "self" must disappear.  Yet one must retain enough self to act as a human, instead of merely a machine taking orders or acting from impulse, without taking into account reason or morality.  In this case, Orwell is paralyzed and chooses to conform.


Deal Me In Challenge #2