The World of Tomorrow by E.B. White 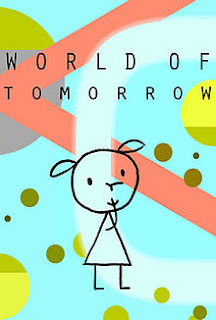 I seem to be getting mostly essays lately for my Deal Me In Challenge.  This week, I read The World of Tomorrow by E.B. White, the famed author of Charlotte's Web.  White wrote this essay about the 1939 World's Fair in New York, where visions of the future abounded and a bright tomorrow was laid before eager and credulous eyes.

"The eyes of the fair are on the future ---- not in the sense of peering toward the unknown nor attempting to foretell the events of tomorrow and the shape of things to come, but in the sense of presenting a new and clearer view of today in preparation for tomorrow; a view of the forces and ideas that prevail as well as the machines.

To the visitors the Fair will say, 'Here are the materials, ideas and forces at work in our world.  These are the tools with which the forces of the World of Tomorrow must be made.  They are all interesting and much effort has been expended to lay them before you in an interesting way.  Familiarity with today is the best preparation for the future."
( ~ official New York World's Fair pamphlet)

Someone is obviously trying to sell something grand, and it was enlightening to read about White's experience at the Fair.  Right from the start, we sense a disconnect between the two, as he personifies the event.  His first sentences read:  "I wasn't really prepared for the World's Fair last week, and it certainly wasn't prepared for me. Between the two of us there was considerable of a mixup."  White informs the reader that upon his visit, he had a cold and that "when you can't breath through your nose, Tomorrow seems strangely like the day before yesterday."  He then gives a catalogue of the exhibitors with strangely impersonal names such as Kix, Astring-O-Sol, Textene, Alka-Seltzer and the Fidelity National Bank. White's impressions do not inspire awe or a trust in Tomorrow.

"It is all rather serious-minded, this World of Tomorrow, and extremely impersonal.  A ride on the Futurama of General Motors induces approximately the same emotional response as a trip through the Cathedral of St. John the Divine.  The countryside unfolds before you in $5-million micro-lovliness, conceived in motion and executed by Norman Bel Geddes. The voice is a voice of utmost respect, of complete religious faith in the eternal benefaction of faster travel ........  When night fall in the General Motors exhibit and you lean back in the cushioned chair (yourself in motion and the world so still) and hear (from the depths of the chair) the soft electric assurance of a better life --- the life which rests on wheels alone --- there is a strong, sweet poison which infects the blood.  I didn't want to wake up.  I liked 1960 in purple light, going a hundred miles an hour around impossible turns ever onward toward the certified cities of the flawless future.  It wasn't till I passed an apple orchard and saw the trees, each blooming under its own canopy of glass, that I perceived that even the General Motors dream as dreams so often do, left some questions unanswered about the future.  The apple tree of Tomorrow, abloom under its inviolate hood, makes you stop and wonder.  How will the little boy climb it?  Where will the bird build its nest?"


White makes a few other observations which are very powerful statements:

"In Tomorrow, people and objects are not lit from above but from below"

"Rugs do not slip in Tomorrow, and the bassinets of newborn infants are wired against kidnappers.  There is no talking back in Tomorrow.  You are expected to take it or leave it alone."

"In Tomorrow, most sounds are not the sounds themselves but a memory of sounds, or an electrification."


At the end of the essay, instead of remembering the Fair itself, White's recollections are quite different:  the trees at night, eerie shadows, fountains in the light, a girl, remembered not just as passing impressions, but in generous detail.  The last line of the essay stabs home his point:

"Here was the Fair, all fairs, in pantomime; and here the strange mixed dream that made the Fair: the heroic man, bloodless and perfect and enormous, created in his own image, and in his hand (rubber, aspetic) the literal desire, the warm and living breast."


After my first read of this essay, I was left completely unmoved.  I had no interest in the 1939 World's Fair, and White's ramblings about his cold, standing in line, etc. which I found annoyingly pointless.  It was only when I read the essay for a second time, that his consummate skill as a writer drummed me over the head.  Though not stating his views outright, with each sentence White was building his case, having the reader experience the loss of humanness and empathy that the rapid rise of technology was moving towards.  When one places the value of machines and progress above the people they are supposed to be serving, you lose the human qualities of life and the simplicity, the wonder and human connection in life that make it so fulfilling.

Perhaps it's telling that White moved from New York to Maine that very year.


Deal Me In Challenge #8