The Oresteia ~ Agamemnon by Aeschylus

"Dear gods, set me free from all the pain,
the long watch I keep, one whole year awake ...
propped on my arms, crouched on the roofs of Atreus like a dog."

Agamemnon is the first of a trilogy of plays called The Oresteia, the next two plays being The Libation Bearers and The Eumenides, all performed in 458 B.C., only two years before the death of Aeschylus.  This surviving unified trilogy allows the reader to experience the development of these three-part stories and to observe the common strands of informatiion and enlightenment winding throughout.  Each play would have built support and framework for the others.  However, even though we have all three plays of this trilogy, the satyr play Proteus is lost, as it would have been a type of comic epilogue to finish the Oresteia.

The "fuse" of the war with Troy was the kidnapping of Helen, the wife of Agamemnon's brother Menelaus, by Paris, prince of Troy.  To get fair winds to sail for Troy, Agamemnon was forced to sacrifice his own daughter, Iphegenia.  The war was fought for ten long years, and at the end, because of outrages committed against the gods, many of the heroes took years to find their way home (Odysseus' journey in The Odyssey is the story of one of these heroes).

The curse of the House of Atreus, adds another element to the play, going back to the family's founder, Tantalus.  Offending the gods, either by attempting to deceive them into eating the flesh of his son, Pelops, or by endeavouring to plunder nectar and ambrosia from the gods, Tantalus was punished in the Underworld by being eternally inflicted with a raging hunger and thirst.  Pelops was resurrected by the gods, but eventually incurred a curse by killing his desired bride's father and fleeing with the girl, Hippodamia.  An attempted rape of the girl by Myrtilus ensued, and when Pelops threw him from a cliff, he cursed Pelops.  The hereditary nature of the curse resulted in the killing of children by their parents and vice versa, a destroying of the whole family from within.


The play begins with a Watchman who is surveying from the roof of Agamemnon's palace, lamenting the years of watching and waiting for a very important signal, a signal that would indicate the completion of the war with Troy.  The very first lines themselves are a signal, setting a sombre, ominous tone to the scene:

The beacon is seen and the Watchman rejoices for the return of his king, but the mood does not lighten as the Chorus enters and begins its parados (the chorus' entrance song).

The Chorus consists of elderly men who were too old ten years ago to make war on Troy, but now impart perhaps the most critical information in the play in their back-story:


Agamemon is put in an unbearable position.  He is protector of his household, therefore to kill his daughter goes against his moral obligation.  On the other hand, if he dismisses Artemis' command, he would be disobeying Zeus which would denote a refusal to fulfill his familial accountability to his brother, an offence against his very being.  He is caught in an inescapable situation. Fate is suffocating him and no matter what his choice, there will be appalling consequences.  His words are seeped in agony:

"My fate is angry if I disobey these,
but angry if I slaughter
this child, the beauty of my house,
with maiden blood shed staining
these father's hands beside the altar.
What of these things goes now without disaster?
How shall I fail my ships
and lose my faith of battle?
For them to urge such sacrifice of innocent blood
angrily, for their wrath is great ---- it is right.  May all be well yet."

Once Agamemnon makes the decision to sacrifice his beloved daughter, his whole character alters.  In spite of her heart-rending pleas, the men who have known her since she was a child, lift her upon the altar.  Although the audience witnesses the poignancy of the preparation of her sacrifice, we are left to imagine her terrible fate.


Meanwhile, Clytemnestra, Agamemnon's wife and the leader of Argos during his absence, has entered during the Chorus' story, and she announces the fall of Troy, which news the Chorus is hesitant to believe, implying that the populous of Argos is discontent after these long years of war.  A Herald arrives confirming the victory of the Greeks, and proclaiming the return of their king, Agamemnon.  His wife professes overwhelming joy at his homecoming, and in an ironic twist, the Herald is impressed with the truth and majesty of her words.


Agamemnon arrives in regal impressiveness, riding in a chariot with Cassandra, the prophetess and princess of Troy by his side, his winnings from the spoils of the war. Clytemnestra greets him with overblown and excessive oratory, spreading purple carpets for him to walk on.  The king denounces such delicate pomp, yet walks on them anyway, unwittingly proclaiming a rather chilly illustration of his own character and a whisper of his fate:

"Discordant is the murmur at such treading down
of lovely things; while God's most lordly gift to man
is decency of mind.  Call that man only blest
who has in sweet tranquillity brought his life to close.
If I could only act as such, my hope is good."

Again, Agamemnon has idealistic wishes for a good outcome to his struggles, yet he almost seems to realize that it is a futile hope.  The trampling and "crushing" of the purple carpets symbolize his trampling and crushing of all that is delicate and beautiful: Iphigenia, Troy and soon, Cassandra.

Clytemnestra attempts to invite Cassandra inside, but she silently resists until Clytemnestra gives up and enters herself, leaving Cassandra alone with the Chorus. Finally, the girl speaks, but the words flowing from her lips are laments and apocalyptic premonitions.  She relates her own story, and also begins to offer vague prophecies of calamity and death, revealing the cause of the melancholy and impeding doom which blankets the city in spite of the return of its king.  She claims to foresee her death and Agamemnon's at the hands of a woman, however, the chorus, bewildered and startled by her claims, refuses to believe her.  Her last words are pregnant with eerie foreshadowing:

"..... That room within reeks with blood like a slaughterhouse ..."

Resigned to her fate, she enters the house.


Suddenly Agamemnon cries out:  "Ah, I am struck a deadly blow and deep with!"  At this point, the Chorus fragments, undecided and perplexed as to what they should do. When the doors of the palace open, Clytemnestra is standing over the prone and bloody bodies of Agamemnon and Cassandra, bringing the Chorus' horror to its peak, as Clytemnestra describes the murder of her husband claiming Agamemnon's evil deed to his daughter as her right.  The Chorus, while still bewildered, finally agrees that judgement between them is unclear and revisits the cause of the war with Troy: the repercussions from Helen's perfidy still resound.

Aegisthus (Clytemnestra's lover) enters the scene, exchanging insults with the Chorus, but Clytemnestra attempts to calm his ire, claiming that the curse has been cancelled by her act of retribution. She and Aegisthus will be able to reign in peace and benevolence. The altercation does not diminish as the play ends.

The next play in the trilogy is The Libations Bearers, and we get a hint of one of its characters in this play, when Clytemnestra mentions that she has sent their son, Orestes, away to safety when there were rumours of unrest in Argos.  In the second play, Orestes returns.

Greek scholars bring out a number if interesting points in this first play that would not be apparent to a modern audience.  The Greek spectators would have been expecting Cassandra to remain silent and have Clytemnestra draw her out, a common strategy in Greek theatre.  The fact that Cassandra actually speaks would have astounded onlookers, therefore making her speeches and presence much more powerful.

They also highlight the masculinity of Clytemnestra, noting the Greek words she uses to describe herself as being very masculine references to a Greek audience.  The fact that she is placed in the doorway of the house ("oikos" - a woman's domain) as the murderess, would have been appalling to the viewers.  While near the end of the play, she attempts to reclaim her sex as woman, the male images of power, vengeance, murder and ruthlessness still remain.

Hubris in Greek does not simply mean pride but instead indicates wanton violence motivated by pride.  Both Agamemnon and Clytemnestra suffer this poisonous quality.

My personal observations ....?   I'm continually impressed by the lack of reliance on plot by the Greeks as they, in fact, often give "spoilers" throughout the whole play or poem. The plot is only the packaging; the real story is born of the intrigues, the capriciousness of the gods, internal struggle, personal sacrifice and vengeance.  How the plot unfolds is secondary to performance, an intense and acute penetration into the soul of man. 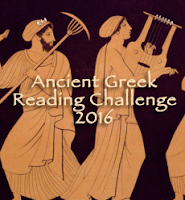