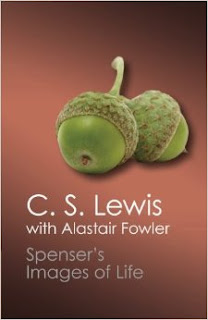 Normally, I don't read introductions or commentaries on books or poetry that I plan to read, until after I've finished the work.  I prefer to experience the art from a point of innocence (or perhaps, ignorance is a better word!), forming my own opinions without influence, even if I struggle with my first read through. However, this time I threw all my ideals to the winds and called for help.

In April I'm reading The Faerie Queene with O, Cirtnecce, Jean, Ruth, and Consoled Reader, and considering the length and complexity of this poem, I confess that it was wiser to admit my complete ineptitude and look for someone who was very familiar with this type of poem and era to give me a little boost.  Since C.S. Lewis' expertise was in Medieval and Renaissance literature, I suspected that he would be a good place to start.  His book, Spenser's Images of Life is a compilation of lectures notes, put together by Alastair Fowler, to give students a deeper insight into The Faerie Queene.

I'm not going to even pretend that I understood half of what Lewis was saying in these lectures/notes, but my lack of understanding emphasizes one of the many things that I respect about the man.  He is able to turn on his intellect and produce a brilliantly insightful and stimulating analysis of perhaps the most complex poem in the English language, yet he is also able to let his intellect "idle" and write children's stories, sci-fi fiction or even a layman-type book such as Mere Christianity.  With Spenser's Images of Life, I had to read it slowly and let it percolate.

Lewis begins by stating that The Faerie Queene is the most difficult poem in the English language, a rather daunting claim for me, as I'm going to be reading it in just over a month.  He claims that the poem works on a number of levels and the mistake readers can make is reading it from only one perspective and thinking that is all it has to offer.  The simple aspect of the poem is that it's a moral allegory, in that the story contains a moral, but the poem is more than a narrative, containing images that work on the mind.  We must not only read, but see the work.

Lewis believes that Spenser, like Botticelli, accepts "traditional images, he loads them with wisdom from the philosophers and disposes them in divine compositions ......... with a propensity of mingling the Christian and the pagan."  Those of Spenser's tradition would have regarded ancient poetry as a type of veiled theology, and the mixing of the worlds would not have seemed strange to them.  In fact, Lewis believes that "Spenser's Nature is really an image of God himself."

Lewis goes into detail about certain aspects of the poem, covering the following topics:

The last chapter is particularly interesting as Lewis examines Spenser's letter to Raleigh about The Faerie Queene and, quite expertly, "prosecutes" his meaning, declaring that most of what he wrote is not supported by the poem itself.  Many of Lewis' arguments make good sense.  He proposes that Spenser was not entirely aware of the depths of his own brooding and birth of the poem, that came from his experience with philosophers, poets and iconographers.  He also suspects that Spenser might have written the letter with someone at his elbow, massaging his words to make the poem fit classical (and possibly political) expectation.

In any case, this book was helpful as an introduction to the poem, but it will also be handy to read The Faerie Queene with it in hand.  Lewis' points must be better understood in the context and framework of an already developing story, allegory or image.  As to what our expectations with regard to the poem should be, Lewis has a very straightforward answer:

"We should expect, then, from Spenser's poem, a simply fairy-tale pleasure sophisticated by polyphonic technique, a simple 'moral' sophisticated by a learned iconography.  Moreover, we should expect to find all of these reacting on one another, to produce a work very different from what we are used to.  And now it is time to catch hold of one thread of the fabric, and pull......."