The Canterbury Tales ~~ The Monk's Tale 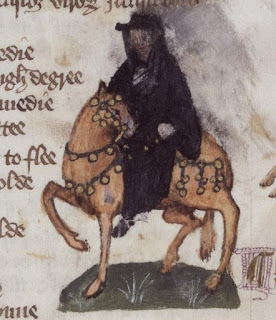 In the Words of the Host to the Monk,  the Host laments that his wife is not nearly as patient as Dame Prudence in The Tale of Melibee, preferring to take the guise of a nagging fishwife who likes to challenge him, rather than a tolerant spouse.  But enough of that, the Host encourages the Monk to begin his tale, but then proceeds to characterize him as a pale, but well-cared for monk who is discreet yet wily.  He thnks the Monk’s profession is misplaced as he would be better off helping to populate the world.  Without taking offence at the Host’s unwanted comments, the Monk chooses the genre of tragedy and begs pardon if he gets any of the events chronologically mixed up.


The Monk states that he will relate of the griefs of people who plunged from high esteem, with no luck to regain their position:

Lucifer:  Although he is an angel and not a man, the Monk places him first.  Through sin, he fell and in Hell he still remains.

Adam:  He was distinguished above all, being made directly from God and not procreated, yet he could not follow one simple decree.  His actions brought untold misery and torment.

Samson:  Although from birth he was marked for God, he allowed his wife to deceive him.  Some of his exploits are related but then we get to his downfall; he trusted his wife with the secret to his strength and she betrayed him.

"A warning from his story, old and plain:
Men should keep counsel and not tell their wives
Secrets that it concerns them to retain,
Touching the safety of their limbs and lives."

Hercules:  Hercules' strength and fame are beyond renown, and we hear of his famous feats, but his wife, Deianira, made a shirt with poison woven within its strands and Hercules, as his flesh began to rot, died.

Nebuchadnezzar (II):  This conquering king met his match in Daniel, who refused to bow to his idol of gold.  Because Nebuchadnezzar put himself above God, he lost his sanity, living like an animal for a time until his wits were restored and he recognized God's sovereignty.

Belshazzar:  He fashioned himself as a proud king, but during a feast, he was astounded to see an armless hand writing a script on the wall. The writing said: Mene, Tekel, Peres, which Daniel interpreted as his kingdom was about to fall because of his self-pride.  Because he used vessels from the temple of Jerusalem to assist in revering his Babylonian gods, punishment followed.  In fact, he was slaughtered that very night and we learn:

"That there's no lordship but is insecure.
When Fortune flees a man is left forsaken.
Of glory, wealth and kingdom; all's past cure."

Zenobia:  Queen of Palmyra, she is what one would call a tom-boy.  She is able to rent a bear apart and beat grown men in a wrestling match.  She refuses to marry but is eventually convinced. and the marriage, though "bland" is a happy one.  While nearly always refusing to have sex with her husband, she does manage to bear him two sons.  Her learning is broad and with her husband they conquer many lands.  Upon his death, she held her kingdom together by force of will.  Yet when the Emperor Aurelian assumed power in Rome, he dared to wage war upon her, routing her and taking her in chains through Rome, much to her everlasting shame.

King Peter of Spain:  Peter of Castile (also known as Peter the Cruel, or Peter the Just) is betrayed and murdered by his own brother.  This story is only two stanzas but the second stanza is chock full of information, offered in the form of a riddle, the references emblematic of the details of Peter's betrayal and death.  The words would have probably needed no explanation to Chaucer's audience but modern readers would need to consult the notes in their text to make heads or tails of it.

King Peter (I) of Cyprus:  Because of his success in battle, his liegemen envied him and plotted his death.

" ....  Thus Fortune with a light
Turn of her wheel brings men from joy to sorrow."

It is noted that Chaucer's Knight seems to be in service to him.

Bernabo Visconti of Lombardy:  This Duke of Milan appears to be despised for his "indulgence".  His own nephew "wrought (his) misery" and death.


Count Ugolino of Pisa: Because of lies told by the Bishop Ruggieri, Ugolino was imprisoned in a tower outside of Pisa together with his children, three of them barely five years old.  One day their jailer shut up the tower and their supply of food ceased.  Ugolino is condemned to watch his children perish of hunger before his eyes until he, too, also expires.  Chaucer suggests a reading of Dante, where this story too, has been told and the great poet (Dante) has all his facts in order.  I know Count Ugolino well, as I've met him once before in The Inferno.

Nero:  Proud of his outward display of finery, he took great joy in burning, and killing his senators simply for amusement.  And that's not the worse of it.  He lay with his sister, murdered his brother and carved up his mother's womb, just to find out where he had resided as a baby.  But the height of his depravity was that he showed no remorse for his crimes, treating them as daily common occurrences.  Seneca was Nero's wise teacher in youth, but because he condemned his wicked actions, Nero disposed of him as well.  Well, Nero's treacherous behaviour caught up to him at last, and one night, all the citizens decided to mutiny.  Nero search for a friend to shield him, yet all doors were closed on him and even the gods did not deign to hear his prayers.  Finding two peasants in a garden, he begged them to behead him and protect his corpse but in the end, he was forced to slay himself and so:

Holofernes:  A respected captain, never had one won so many battles or subdued so many enemies.  He was not only conqueror, but he forced people to renounce their beliefs and accept Nebuchadnezzar, his king, as their god.  But then, disaster happened. One night, brave Judith separated his head from his body and Holofernes was no more.

King Antiochus the Illustrious:  Replete with an enormous ego and a mean spirit, he hated "God's own people," promising to clear Jerusalem of the Israelites.  But God visited a hideous disease upon him, with a wrenching of his guts and an infestation of worms, which created such a stench that no one wanted to come near him.  And so, he perished.

Alexander:  The famous Alexander with his dazzling persona, conquered the world.  No other can compare with his brilliant command and Fortune followed close at his heels.  Yet after twelve years, the fickle Fortune deserted him and he died of poison at the hands of his men.

Julius Caesar:  An admirable conqueror, Caesar got on the wrong side of Fortune.  After his triumph over Pompey, he returned to Rome to don the laurel-wreath, but Brutus conspired against him, jealous of his fame.  Upon the Capitol, the traitor and his conspirators stabbed him, yet he died with dignity.  Chaucer recommends reading this story from Lucan, or even Suetonius or Valerius.  And as for Dame Fortune:

Croesus:  Croesus (king of Lydia) dodged death once .......... he was led out to be burnt at the stake, but such rain poured down that it quenched the fire and he was able to escape.  Yet his escape did not make him wiser and he became so arrogant that he thought he would reign forever.  He dreamed that Jupiter was washing him and Phoebus toweling him dry.  What more could a king ask than to have the gods as servant?  But his daughter, Phanya, interpreted his dream for him, saying that Jupiter symbolized snow and rain, and Phoebus the sun, all who would beat upon his dead body after he was hanged.  Her words came to fruition.

"Tragedy is no other kind of thing
Nor tunes her song save only to bewail
How Fortune, ever fickle, will assail
With sudden stroke the kingdoms of the proud,
And when men trust in her she then will fail
And cover her bright face as with a cloud ......."

"Ho, my good sir, no more!"  The Knight interrupts the Monk's story in the Words of the Knight and the Host.  He is entirely displeased with the tone of the stories and much prefers to hear the opposite: a man of little means, rising in status and prospering.  The Host agrees with this protest, saying that he has been so bored that he almost has fallen asleep.  Why hear of things that are past care?  And if one puts his audience to sleep, who remains to listen to him?  He begs him to tell a tale of hunting, but the Monk declines, saying that he is in no mood for fun and that he will tell no more tales.  The Host then spots a Priest beside a Nun and states that even though his horse his weak and measly, he must be able to tell a tale of cheer.  The Priest promises to do his best.

In The Monk's Tale, the theme is obvious:  do not trust to Fortune as she is just as likely to deserted you as help you.  Whether you are an admired leader, like Alexander, or a despised tyrant, such as Nero, your end could be identical. Yet even though the ancient song of Fate echoes through the story, shaping a destiny that is out of human control, there is a definite tension between God's judgement and Fortune.  It's actually quite bizarre.  You can think of it two ways:  luck can stave off God's judgement, or, when God comes to judge, Fortune will flee.  The latter would make more sense.  I don't quite know what to make of this intermingling of ancient beliefs and Christian faith.  I'll have to give it some further thought .....