The Canterbury Tales ~~ The Tale of Sir Thopas

The Host spies Chaucer and commands him to tell a tale of mirth, while describing some of his manner and looks.  Chaucer claims to know no other tale except for a rhyming romance that he learned, and so he begins. 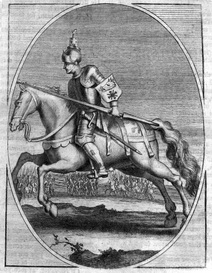 The Tale of Sir Thopas

Sir Thopas was born at Popering in Flanders, and was a lord known for his fair and gentle manners.  A description of his pleasing person follows, along with praises of his sporting aptitude and his ability to capture female hearts.  But no, Sir Thopas is chaste, and out he goes into the forest where he is overcome by love and dreams of an Elf-queen as his sweetheart. (Heavens, this is starting to remind me of an Arthurian story!)  He rode long enough to find the country of Fairy.  Intercepted by a giant named Olifaunt, who threatens him, they have an altercation and Thopas escapes, but not before promising to deal with him at a later date.

He gathers his men to fight the giant, our slender and gay Sir Thopas, and here follows long descriptions of his food, and his battle clothing and array, until the Host can stand it no more and begs Chaucer to cease his tale, labelling it as doggerel verse which is used to produce a comic effect. Chaucer protests at this treatment, but the Host claims his rhyme is "crappy" and a waste of time.  He will only be permitted to proceed if he tells something in alliterative verse or prose, so Chacuer agrees to prose but warns his story may have echoes of other stories already told.  He proceeds with The Tale of Melibee.


Thopas seems to abandon the realities of life and prefers to search out fantastical experiences with such fanciful characters as Elf-queens and giants. It was also laughable to see the Host chastize Chaucer, not for telling a boring story, but for telling one that was simply too atrociously inept to be listened to.

How very amusing to see Chaucer poke some fun at himself!  I rather wondered though, if there were not some deeper meanings that I was missing, that would have made the tale so enjoyable for the listeners of the time, such as style and rhyme and syntax and word-choice.  There are subtleties that were common for that era that aren't so obvious now, and I lack the appreciation I could have garnered with that antiquated knowledge.  In any case, I'm now curious as to what Chaucer will do with Melibee.  Will it be a serious story, or more tongue-in-cheek teasing?