Laertes prepares to embark on his journey back to France, but, as he speaks to his sister Ophelia, he brings into question Hamlet's love for her.  He cautions that Hamlet's first loyalty is to the kingdom on Denmark and, if personal relationships get in the way, he will choose country over love.  Oh sister, keep you love under control and your virtue guarded lest you experience future regret, and Ophelia agrees to his plea, but oddly tells him only if he takes his own advice.

Polonius enters and gives his son advice on how to conduct himself respectfully and honourably.

"....... Give thy thoughts no tongue,
Nor any unproportioned thought his act.
Be thou familiar but by no means vulgar.
Those friends thou hast, and their adoption tried,
Grapple them unto thy soul with hoops of steel,
But do not dull thy palm with entertainment
Of each new-hatched, unfledged comrade.  Beware
Of entrance to a quarrel, but being in,
Bear 't that th' opposèd may beware of thee.
Give every man thy ear but few thy voice.
Take each man's censure but reserve thy judgement.
Costly thy habit as thy purse can buy,
But not expressed in fancy --- rich, not gaudy,
For the apparel oft proclaims the man,
And they in France of the best rank and station
Are of a most select and generous chief in that.
Neither a borrower nor a lender be,
For loan oft loses both itself and friend,
And borrowing dulls the edge of husbandry.
This above all: to thine own self be true.
And it must follow, as the night the day
Thou canst not then be false to any man."

At Laertes' departure, Polonius inquires at to what they were speaking of, and Ophelia relates that he has cautioned her about Hamlet.  Polonius supports his son's advice and, though Ophelia tells of Hamlet's recent attentions to her, Polonius indicates those attentions are meaningless and that he is, in effect, playing with her feelings.  She needs to conduct herself honourably and really, to have nothing more to do with Hamlet.  She states that she will comply with her father's wishes.


The beginning of this scene contains a number of cautions and instruction to both Ophelia and Laertes on how to live in a way that will benefit them.  It's as if the keys to a happy life are given to them to use if they choose.  Why?  Why so many cautions given to each other in this family?  I can see Laertes being wise enough to pick up on the uncomfortableness of the situation at court. Perhaps he senses that the situation will come to a head and that Hamlet will be diverted by his political responsibility with no time for courting, and he wishes to advise his sister to spare her feelings.  As for Polonius' warnings to Laertes, I'm less certain.  Polonius doesn't seem particularly bright, so far, but his advice is sound.  What prompted it?  Is he simply giving fatherly counsel ....???

This scene also gives us the first exposure to Hamlet and Ophelia's relationship.  Is there a hint that she is being a little too free with her behaviour?  From the words of her father and brother, it appears she is a young, unexperienced girl who is taking the attentions of a man who is her superior, too much to heart.  She foolishly believes him when he is really just toying with her affections.  And what does this say about Hamlet?  Is our prince really so insincere?  Is he also being portrayed as being young and immature, or are Laertes and Polonius overreacting? 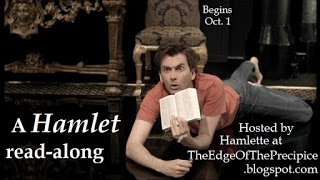