The Canterbury Tales ~~ The Tale of Melibee 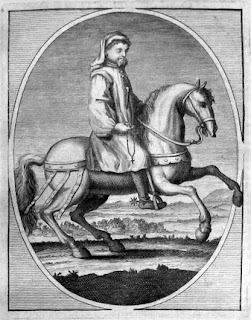 The Tale of Melibee

A young man named Melibeus had a wife named Prudence and a daughter, Sophie.  One day while he is away from home, three of his enemies enter the house and beat his wife and daughter, giving his daughter five mortal wounds.  Melibeus upon returning, is inconsolable but his wife cautions him to moderate his weeping, using various examples from antiquity.  She counsels him to call all his friends and family, who are wise, and to take their advice, even though Melibeus is ready to go to war with his enemies.

The surgeons claim that their profession commands them to do no harm, and that they cannot support war, but they are willing to help his daughter.  His enviour neighbours and false friends flatter him and counsel war.  The lawyer advises him to guard his person and house, but he will need time to decide whether it is meet to go to war.   The young men cry for vengeance, but an old wise man chastens them for calling for war without truly understanding the consequences of it.   He is shouted down and we are told that Melibeus also has secret advisors that give him guidance out of the hearing of the others.

Prudence sees that her husband is preparing for war and tries to urge caution, but Melibeus shrugs off her opinion, saying that firstly, he is deciding based on the advice of wise men, and secondly, all women are wicked.  She counters his arguments with examples from the Bible and Seneca, saying if he will only listen to her, she will deliver their daughter whole.  Swayed by her long and compelling argument, he consents to be ruled by her advice.

Prudence instructs him that he must be governed by God and to dispel three things in his heart that impede good advice and they are: anger, greed, and haste.  Next, he must not show whether he prefers peace or war, cloaking his intent.  He must determine his true friends from false flatterers and then discover if they are discrete and wise and old enough to have gained valuable learning.  After, she gives him examples of people whose advice he must shun if his decision is to be correct.

Since his wife has described to him the people whose advice he should be accepting and those he should be rejecting, she will now teach him how to examine this advice, according to the precepts of Cicero.  One needs to look at the outcome of the advice taken in order to make the best choice:  what is the root of the advice and what is the fruit.  If you are not certain about advice, don’t act on it.  She continues to tell when and under what circumstances a plan may be revised.

Melibeus claims that he is gratified by her instruction, but if she would please examine the particulars of the case and tell him what should be chosen in the present circumstance.  Instead, though, she asks his patience and then proceeds to list his errors of judgment to the present time.  He agrees to alter his counsellors, and his wife says that they must determine who is most reasonable and has offered the most helpful advice.

From here on Dame Prudence continues to deliver invective against Melibeus' weaknesses and moral instruction for his benefit.  She says that he has allowed the world to rule over his soul and has forgotten his Creator.  With regard to money, she instructs him on how to handle riches and how to dispense forgiveness.  Melibeus finally sees beyond the current issue to the future ills that vengeance might breed, and agrees to forgive those who have done wrong to him and his family.

With this tale, I received the impression of a trial.  The wife, in ruling her husband, is, in effect, producing witnesses to support her views.  These witnesses are respected men of ancient times, and, given their status and renown, are almost impossible to contradict.

While this tale has often been characterized as a debate, to me it seemed more like a lecture or discourse on the issues of life, with Prudence instructing and Melibeus being cultivated by her wisdom.  Initially, Melibeus is concerned with practicalities, or reality if you will, but Prudence takes those practicalities and turns them into matters of character and the right way of conduct, which does not only cover the present situation they must deal with, but gives guidance in the way one must conduct oneself in life.  She sways him not by womanly emotion but by clear logic and reason, an unusual but powerful technique.

Some scholars think that The Tale of Melibee was originally meant to be a stand-alone tale, yet was later added to The Cantebury Tales.  Given that it is a translation of an original French tale, Livre de Melibee et de Dame Prudence by Renaud Louen, which is also a translation of an earlier tale, Consolationis et Consilii by Albertanus of Brescia, that makes sense.  Its fit into The Canterbury Tales is tenuous at best.  Taken as a tale, it is long-winded and boring, but standing alone and viewed along the lines of a Ciceronian defence, it holds interesting components.  I actually quite enjoyed this tale and, judging from the commentary on it, probably got more out of it than previous readers.


Behold The Stars -- The Tale of Melibee