The Canterbury Tales ~~ The Prioress' Prologue and Tale

Okay, I really couldn't let this pass; if you look closely at the picture of the Prioress below, doesn't it appear that she has a beard?  Odd.

We begin with the Words of the Host to the Shipman and the Prioress, who makes a Latin blunder and then, referring to the last tale, warns the company to be wary of monks.  Turning to the Prioress, he bids her tell a tale, and she appears happy to comply.

She bases her first words on the 8th Psalm, and invokes Mary as her muse, lauding her purity, virtues and magnificence.  The Prioress is only a weak vessel but with Mary's grace, she will tell her story. 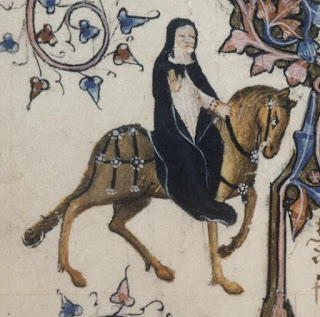 
In a Christian town in Asia, there was a Jewish ghetto supported by the Crown. The Prioress categorizes the Jews as foul userers and has nothing good to say about them.  Near the ghetto, was situated a little school of Christian children, of whom one, a widow's son of seven years old, was diligent in his prayers and reverence for all that was holy.  He sang all day praising Christ's mother, Mary:

"He sang it with a childlike clarity
And boldly, word by word and note by note;
And twice a day it filled his little throat,
Going to school and coming back again,
Praising Christ's mother with all this might and main."


And thanne he song it wel and boldely
Fro word to word, acordynge with the note
Twies a day it passed thurgh his throte
To scoleward and homward whan he wente
On Cristes mooder set was his entente

Yet as he sang these praises going down the ghetto street, the Jews plotted his demise and ended up murdering the innocent child.  They dumped him in a sewage drain, but "murder will out" and the child's voice continued its song. His mother went in search of him and though the Jews would not let her find her son, Jesus led her to him.  As they retrieved the child's body, still his singing continued.  The provost condemned the guilty Jews to death by drawing them apart by horses and then hanging them from a cart.  The holy abbot, who conducted the boy's funeral, asked him who permitted his song, whereupon he answered:

"'Though to the bone my neck is cut, I know,'
Answered the child; 'and had I been confined
By natural law I should, and long ago,
Have died.  But Christ, whose glory you may find
In books, wills it be also kept in mind.
So far the honour of his mother dear
I still may sing O Alma loud and clear.'"


"My throte is kut unto my nekke boon
Seyde this child, "and as by wey of kynde
I sholde have dyed, ye, longe tyme agon
But Jesu Crist, as ye in bookes fynde
Wil that his glorie laste and be in mynde,
And for the worship of his Mooder deere
Yet may I synge O Alma loude and cleere.

Mary, mother of Christ, bade him sing the anthem until his burying, and so at his burying, the singing stopped.  The convent began to weep at his holiness and reverence.  The story ends by mentioning Hugh of Lincoln, who was also murdered by Jews, and by a benediction for God's mercy.

This tale mirrors other tales in Medieval Christendom, particularly the story of Little Saint Hugh of Lincoln, where Jews are portrayed as greedy, power-seeking and enemies of the true faith.  The Prioress makes sure to demonize the Jews, yet shows the Christian element as little, innocent and helpless. However even with the tyranny of the Jews, Mary is able to set things aright with the miracle of the boy's perpetual singing and the indication of his possible sainthood.